Since Med in Ireland we have been very busy helping Irish companies market their services, products and IP to their markets. Getting attention in the marketplace is a fundamental problem. At most, your prospective clients will give a minute or two to your proposal until it sparks a desire within them to see more.

Grabbing attention and answering the questions in advance is vital. We have been pleased to have been commissioned to produce photography and video for many companies in the Irish biomed sector. In fact we have been so successful that 17 of the companies exhibiting at Med In Ireland were using our images and or our video productions at the event.

If you have a moment I’ll share some of the projects as we have undertaken this year for marketing projects within your industry.

We have worked for companies such as, Trulife manufacture and market a product ranges diverse as breast prosthetics to pressure pads for operating theatres. We are pleased not only to have shot footage for a production which was undertaken from the American office,

A former marketing director of the company now as general manager of Touch Bionics in Heidelberg in Germany and we have been privileged to undertake their work in locations ranging from their headquarters in Germany to projects in San Diego, California.
https://vimeo.com/warnerphoto/review/160251956/de3b493fdb
and produced videos in English, German and Japanese
https://vimeo.com/warnerphoto/review/160905510/50f8c25514

We’ve recently undertaken projects that range from wound care to clot catcher devices aimed at removing clots from patients with clots in their brain.

Companies such as Zimmer, who make artificial knees have commissioned work marketing products to orthopaedic surgeons. We have worked both in the Shannon

We also have produced display images for the walls to enhance the visitor experience.

Small companies such as the Galway fertility clinic have commissioned our work and use it in the marketing. Again, like many of our clients are also using our images on their walls .

We are based in Galway and cover all of Ireland and a little further beyond. So far this year we have been in the UK, Germany, Dubai, California on the US West Coast and have projects coming up in Scotland and the American Midwest. In Ireland we provide a nationwide service and do not charge for initial consultation with clients. We also do not charge travel costs within Ireland.

My mobile number is 0872596304. If you get a strange call tone please leave a message. I always return calls.

A sneak preview of my collection, Darkness and Light.
Over the last seven years my images of Ireland were dark, reflecting the Irish mood. Over the last year or so a little light has crept in to my images.
I am a Corporate Photographer specialising in marketing support images for the technology and Biomed sectors. At the same time my private work has focused on the Wild Atlantic Way, principally in my beloved North Connemara. My work in the last few years has taken me from California to St Petereburg , Russia.
I have kept my landscape work under wraps, but inspired by a wonderful photographer in Westport, perhaps its time for these images to surface.
I would love feedback.

Of darkness and light

Over the last seven years of recession in Ireland , we all got on with life despite the misery.
Little did I note that my landscape images were in harmony with the national mood.

Ireland emerges from a Dark place is an on line exhibition of my landscape images shot mainly in the  west of Ireland.

ireland Emerges from a Dark Place

Some time ago we put together this little video that celebrates the inventiveness of the Irish mind.At this time, the feast of St Patrick and the day that the world celebrates Irishness. We would like you to look at this video and remind yourself of the power of a wonderful little country.

Ireland leads the world in inventiveness. We are leaders in the area of biomedical technology, software development, and foodstuffs.

We are little nation with the big heart. We have survived seven years of pain and misery. We have paid dearly for the miscalculation of a number of greedy financial gurus.

Some time ago we put together this little video that celebrates the inventiveness of the Irish mind.At this time, the feast of St Patrick and the day that the world celebrates Irishness.  We would like you to look at this video and remind yourself of the power of a wonderful little country.

Ireland leads the world in inventiveness.  We are leaders in the area of biomedical technology, software development, and foodstuffs.

We are little nation with the big heart.  We have survived seven years of pain and misery.  We have paid dearly for the miscalculation of a number of greedy financial gurus.

Why would a German company send an Irish photographer to film in California, the home of Hollywood

Touch bionics is the world leader in bionic prosthesis.  It restores normal life to clients who for one reason or another are missing a limb.  The technology of touch bionics brings an intelligence to the prosthetic limb enabling its clients undertake even the most delicate task with their prosthesis.

We live in a two-handed world and restoring the missing hand to a client is possibly life changing.

In the past we grew familiar with missing limbs being replaced with hooks or static hand forms.  Touch bionics have  applied their technology to empower the client in the day-to-day living.

Neil Warner is a corporate photographer/filmmaker who lives in Galway on the West  coast of Ireland. Over a career of 30 years he has harnessed his passion for technology and combined it with curiosity that is almost childlike.  He is fascinated by the developments in the biomedical sector that have massively enhanced the lives and lifestyle of hundreds of thousands of people.

Galway is one of the world centres of biomedical research and development. companies such as Boston scientific, Merit Medical,Medtronic, and Cragianna all have major plants in Galway. The National Universityof Ireland, Galway is a leading research centre in the area of biomedical and stem cell development.

As a young photographer, Neil Warner,moonlighted, working at night with the team leading the research in coeliac disease at University College Galway.  The massive enhancement this research has brought to many people in the West of Ireland has led Neil to continue his interest in the area of the biomedical sector.

His work in the area of prosthesis was led by projects for Trulife , a company based in Ireland with the worldwide footprint.  Trulife have led the market in breast prosthesis and have restored ” normality” to hundreds of thousands of women who have undergone a mastectomy.

It was this work that brought Neil to the attention of the marketing team of touch bionics.  Recently he produced a video shot in Heidelberg, Germany, on” Carla”, a German skydiver who uses a touch bionics prosthesis in her life.

Neil is now scheduled to produce a series of six videos for touch bionics and the next one is being shot in the near future in San Diego, California.

Neil is no stranger to international work and to the United States. Up to now his US work has been on the east coast, most recently shooting for Harmac medical in Buffalo ,New York   Two years ago was invited to New York to receive a leadership medal from the International photography Council of the United Nations for his leadership in European photography.

If you love your children
If you pay tax in Ireland
If you drive a car in Dublin
you should read the article by James Sheehan in the Sunday business Post entitled 20 reasons why the Children’s Hospital should not be at St James.
It shows that a dreadful mistake is about to be made in the provision of a national Children’s Hospital ( at long last) on the campus of St James’s Hospital in Dublin.

There is a much more intelligent, well thought out, well resourced plan put forward by a man who was already built three hospitals in Ireland. Dr Jimmy Sheehan, a wonderful visionary of healthcare in Ireland outlines how millions upon millions of euros will be wasted in providing a substandard hospital in the substandard site all just for political reasons.
When the politicians visit us. Remember the promises are based on our taxes and our spending. Is it not right that they should be sculptured to meet our needs, not political goals.
Have a  look at this video which shows why the hospital should be on a greenfield site close to the M 50 in Dublin and accessible to a national audience.

We were pleased to work with Dr. Sheehan on this project 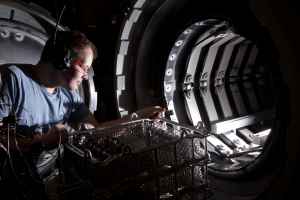 As corporate photographers, we spend most of our time on location.  Recently when working in a brightly lit, ultramodern biomed plant.  I was unexpectedly asked to photograph a section of the plant with a recently installed heat treatment unit. Because most of the project had been anticipated as in available light shoot, I had not brought most my lighting gear in from my Jeep. so I just used a small  flash, which I connected with a radio -controlled slave unit, and in no time at all  I had a very attractive image from what otherwise would have been a very dull situation.

Thinking outside the box, occasionally can be very productive and in this case, save me considerable effort. I would otherwise have had to go to my Jeep but all my lighting gear on a trailer, wheel down the full length of the plant and then start into the often difficult position of trying to find power in the middle of a exceptionally busy plant.

While our  most of our clients were off enjoying their Christmas break we were flying to record the flooding in the west of Ireland. We shot over 500 images for our clients. As we flew a line from Tuam to Gort in Co Galway we were distressed to see the flooding visited of farmers in the area. Near gort we saw this chicken farm .  Pity the poor farmers. 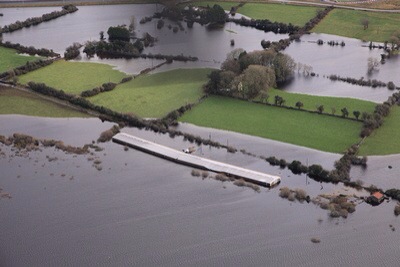 When delivering the final part of a project for a client of ours today I had an opportunity to meet with the directors of the company.

As always towards the end of the project.  I would ask the question ” Are you happy with the project” .  My client said to me that we had worked so closely on the project, he decided to show the videos to his wife and daughter to get an objective opinion.  His daughter remarked to her Dad ” You should show these videos to your parents, I think they will be very proud”.

What a lovely compliment for us to receive. Not only had we delivered the project as promised but our clients were very proud of our interpretation of their company.

I called out to see my clients today purely to tell them how much I enjoyed the project and how great the staff were to work with .  The project included two night shoots and one very interesting sequence that we shot from a car on the highway.  At all times we had received enthusiastic help from their staff who give up some of the busy time to assist me on the project. They are a company that really know customer service and it works its way down to the way they approach everything, even their way of working  with suppliers.

What a great crew, fun, enthusiastic, and hard working.